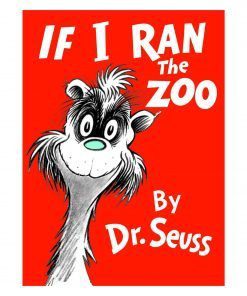 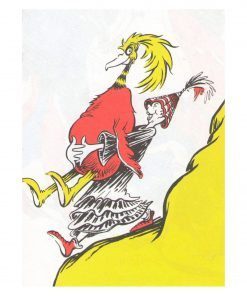 If I Ran the Zoo by Dr Seuss Hardcover

If I Ran the Zoo by Dr Seuss Hardcover

If I Ran the Zoo is often credited with the first printed modern English appearance of the word “Nerd” although the word is not used in its modern context.

It is simply the name of an otherwise un-characterized imaginary creature, appearing in the sentence “And then, just to show them, I’ll sail to Ka-Troo/And Bring Back an It-Kutch, a Preep, and a Proo,/A Nerkle, a Nerd, and a Seersucker too!”

***If I Ran the Zoo has been criticized for its use of racial stereotypes and caricatures. In a 1988 biography of Dr. Seuss, Ruth K. MacDonald notes the perceived presence of “occasional stereotypes of native peoples—potbellied, thick-lipped blacks from Africa, squinty-eyed Orientals,” that “may offend some modern readers. A study published in the journal Research on Diversity in Youth Literature noted the perceived presence of dehumanizing stereotypes of East Asian, Sub-Saharan African and Middle Eastern characters. The Canadian Book and Periodical Council’s Freedom to Read project listed the book as having been challenged in 2015 for “insensitivity and ethnic stereotyping.

On March 2, 2021, Dr. Seuss Enterprises announced that If I Ran the Zoo and five other books would no longer be published due to controversy surrounding reportedly racist images withinIf I Ran the Zoo by Dr Seuss Hardcover those books. Dr. Seuss Enterprises did not specify which illustrations were offensive, but since the book is about animals being collected from all over the world, several nations are depicted in stereotypical ways, for example Nepalese, Chinese, African Pygmys, Persian, Turkish, and Cossack characters. After the books were removed, nine of the top ten, including the top four, books on Amazon’s charts in the United States were Dr. Seuss books, though none of the books were removed.***